Howard Gilkey, designer of the famed California Spring Garden Show and outstanding Oakland landscape architect, has been named “Man of The Year” for 1963 by the Oakland-East Bay GardenCenter Inc.

He will be honored at a dinner Jan. 22 by representatives of more than 3,000 members of the 50 Bay Area horticulture organizations, civic dignitaries and garden experts.

The dinner will be held at Lakeside Park Garden Center with the Oakland Park Commission cooperating in arrangements.

Ralph E. Hillery, outgoing president of the garden center group will present the award. Norvell Gillespie, author, horticulturist and TV personality, will be master of ceremonies.

Gilkey’s name is synonymos [sic] with the annual big garden show here. He was a founding member of the Businessmen’s Garden Club in 1928 and 1929 he helped initiate plans for the show. [sic] He has been its designer through the years.

His imprint is on many phases of Oakland. He was landscape architect for the Park department and acting City Planning Engineer from 1920-22. He designed grounds of Highland Hospital.

As a member of the Woodminster Committee of the California Writers Club, he did much of the early planning which resulted in Woodminster Amphitheater and Cascade of the ’30’s. He is designer for an arboretum in Knowland State Arboretum and Park.

Gilkey has been a member of the faculty of the University of California in Berkeley at two separate times. He is a member of many garden clubs, plays the pipe organ and is writing an epic poem “A Song of Creation.”

The dinner also will celebrate the 13th anniversary of the Oakland-East Bay Garden Center and will be marked by installation of officers. Joseph Machado will be seated as president. 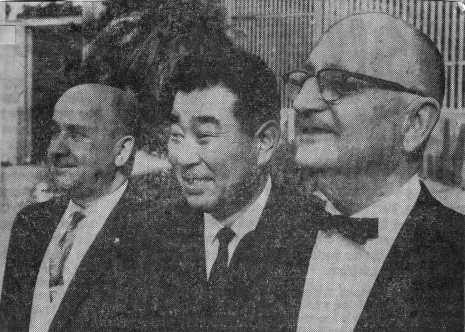