Though volunteer headcount was down for April’s work day, the Dynamic Trio (Barbara, Tom and Ken) managed to work at lightning speed, cleaning the place from top to bottom in less than two hours! Hooray for us!

Barbara masterminded the beds near Lake Shore Ave., and cleared out a huge overgrowth of plants. A bag full to be exact!

Both the north and south stairs were swept despite the abundance of exercisers who appeared. Which is why I’m all for changing the official work day to Sunday. Hopefully there will be less people to work around as we try to neaten things up.

In fact, it’s gotten so bad that on any given Saturday, the place is overrun with workout groups who monopolize the entire the space, pushing everyone out of the way as they make their way up and down the stairs, hooting and hollering at the top of their lungs. One exerciser even asked Tom to move (as he was busy sweeping) so he could run up the stairs. Entirely unacceptable. I hope things improve.

In the meantime, we will forge on … sweeping, pruning, beautifying and making this little jewel special. 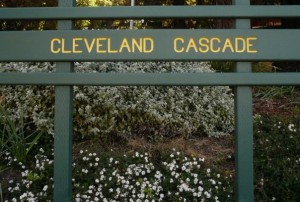